and child sexual abuse material by detecting, investigating, and reporting

data found on the darkweb. You will essentially be following the money to fight slavery.

March 30 from 10am - 6pm EST -  INVESTIGATIONS START and Sponsor Presentations

The anonymous nature of Darkweb sites is a challenge for law enforcement agencies.

We invite tech-savvy minds to apply to participate in this 5-day virtual hackathon event from March 29-April 3, with the goal of investigating data from the Darkweb and uncovering actionable intelligence that can be used to effectively handle real-world cases involving crimes on the darkweb.

ATII is working together with industry data experts to equip law enforcement and federal officials with fact-based content to address the highly challenging and dynamic nature of cybercrimes in human trafficking, modern slavery, and CSAM.

All participants must abide by the following rules:

This open-source-based challenge will consist of groups of highly motivated personnel working with a common goal to combat human trafficking. Darkwebathon brings together talents who are well-rounded professionals able to create actionable intelligence with innovative technology that helps to detect more cybercrime threats and protect society and organizations more effectively.

Each team of 5 will include esteemed representatives from law enforcement and anti-human trafficking-centric NGO’s. Pull your team together in advance, or meet up through our #find-a-team Teams channel (invitation link sent after registration)

With your generous sponsorship, ATII can work together with industry data experts to equip law enforcement and federal officials with tools and evidence-based actionable intelligence to address the highly challenging and dynamic nature of cybercrimes on the darkweb, particularly CSAM.

Sponsors will achieve awareness among our participants/industry experts - and have the ability to give participants access to their software to aid in the darkwebathon investigations and uncover actionable intelligence. 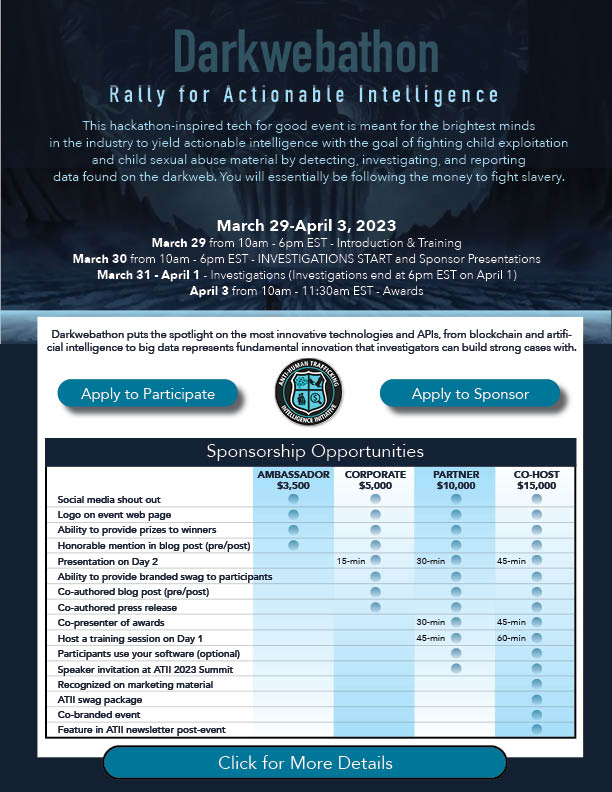 Participants are encouraged to use their own laptops for the event. For those who need help — we can only supply limited assistance with software installation, so please make sure that you have installed any tools that you may need to plan, develop, and demonstrate your live cases during the lightning talk.

The goal is to create digital evidence for qualified leads that law enforcement can use for actionable intelligence.

Various winners of the challenges will receive:

All applicants must sign the ATII Non-Use and Non-Disclosure Agreement upon registration.

Congratulations to the 2022 Darkwebathon Sprint Winners!

Thank you to everyone who dedicated their time and energy into learning new software and scraping the darkweb for acionable intelligence. The winners shared over $100,000 in prizes that were generously donated by ManchesterCF, OSINT Combine, ADF Solutions, Maltego, TCAE, Hunchly, Constella Intelligence, CipherTrace, and Social Links.

Congratulations to the 2021 Darkwebathon Winners!

While Team 26 took first place for number of points earned based on their intelligence report and placement in the hash & cryptocurrency challenges, Brian H. took the coveted MVP of the event award. Many other teams and individuals shared over $100,000 in prizes that were generously donated by ManchesterCF, OSINT Combine, ADF Solutions, Maltego, TCAE, Hunchly, and TWELVE Program.

I would like to express my best endorsement to the Darkwebathon experience: it was such an incredible event rich in a lot of training, international sponsorship participation and I have gained a lot of valuable insights on how to perform investigation included but not limited to the Darkweb.

I have had also the possibility to participate in Darkweb CTF for which I set up an incredible team, meeting incredible people and colleagues also involved in my field.

I was honoured to help the community investigating with all the leads provided during the CTF, in particular crypto address, IP, and email revealing a collection of heinous crimes such as CSAM contents about which the competent LE will investigate further.

I cannot express my gratitude further and I look forward to the next Darkwebathon and I will share my experience with the community to get many other people involved.

"The Darkwebathon was a great event! Unlike most CTFs, we worked with real human trafficking-related data collected from the dark web. Thanks to the generous sponsors, we worked with some of the best tools in the industry. ATII and their intel platform have made it possible for civilians to be able to take up the fight against human trafficking without exposure to the child and sexual exploitation often associated with this crime, and the trauma it frequently leaves on those dealing with these crimes. While the event was gamified, we all understood that our efforts were making a direct contribution to this international battle. We validated image hashes associated with known dark web child exploitation sites and possibly identified new victims in the process. We dove into the Bitcoin blockchain to identify criminal transactions that could be subject to legal processes by law enforcement. We also helped to improve the Hades software by identifying unknown Onion sites, tagging Bitcoin addresses associated with Dark Markets, and investigating and providing intelligence reports on criminal activity we found. In the end, we gained a great appreciation of the amount of work that still needs to be done.”
- Brian H.

I had the honor to participate in the first week-long darkwebathon organized via the Anti-Human Trafficking Intelligence Initiative, which brought together talented professionals and volunteers for actionable intelligence to combat human trafficking.

Provided with leads such as IP address, image hashes and blockchain transactions, our team was able to stand out by producing several reports that helped identifying people related to child-sexual abuse and illicit negotiations.

Albeit without being personally exposed to sensitive materials, it’s been a complex and heartfelt challenge, where I developed insightful skills and empowered my awareness about that piece of web which nobody would like to come across, but everybody can help fight.

Thanks to all the highly motivated personnel I’ve encountered for contributing by sharing their massive knowledge, and to the ATII Team with sponsors, for the inspiring support and unique tools they provided throughout the event, aimed at protecting society and the most vulnerable.

ATII launched  their own Dark Web Intel Monitoring tool during competition. It helped everyone to find out the connections & linked the entities to track these criminals. I have used various dark web tools in the past but ATII's platform is unique among them. This tool has an amazing large dataset with various selectors, crypto addresses, graphs, screenshots, Image hashes data set etc, which helped our team in CSAM investigation.

Our team started investigation with single email id and image hash data set, it was 2 days challenge with Intelligence Report and our team (#Team16) has done amazing job by finding various connections between threat actors by using the platform's Dataset along with sponsored tools: #Maltego & #CipherTrace that gave additional information to us about threat actors. By combination of this toolset, we completed our Intelligence Report. We learned so many things during this event by learning and doing hands-on practice on sponsored tools. Thanks to all sponsored partners.

It was my honor to be part of this amazing event, Our team placed at 2nd position in this dark webathon. Thank you ATII, Judges, Sponsors & their team for sponsoring such an amazing event."

"I had always been passionate about Investigations and the Darkwebathon hosted by ATII gave me an opportunity to do just that. It enabled me to learn and apply new skills, pushing me to go out of my comfort zone.

The Darkwebathon event spanned across 5 days and we were given access to specialized training and software for the event. We were also provided with multiple data sets at the end of the training, such as  IP Addresses, Bitcoin Addresses, SSH Keys, Emails, E-tags, FavIcon, Image Hashes, and conducted an investigation that spanned 2 days. Our team split up and worked on distinct data sets so that we could cover more, working with BTC addresses, Image Hashes and Email addresses led to 3 distinct intelligence reports that covered BTC scams, Individuals affiliated with criminal connections and individuals involved with CSAM.

Many thanks to my teammates: Jess Ben, Allison Owen, Kimberly Newhard for being communicative and supportive over the event."

“Our team was provided thousands of selectors including Bitcoin addresses, emails, and IP addresses and conducted an investigation across five days that led to 4 detailed intelligence reports including potential human trafficking, CSAM, and Terrorism leads.

Starting out with only IP Addresses and e-mails, we conducted a 2-day investigation that led to 5 intelligence reports that helped identify people who were related to CSAM consumption or other illegal things.

Although the topic was complicated and devastating, I had the opportunity to get outside of my comfort zone and to learn so many things during the event. My team, SabadOSINT, got the honor of being shortlisted. Thanks Tiby K., Karthika G., and Robert C. for letting me be a part of it; it is during this kind of event where you learn about the importance of having a strong support system.

THANK YOU TO OUR 2021 DARKWEBATHON SPONSORS 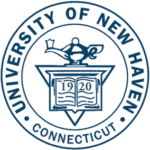 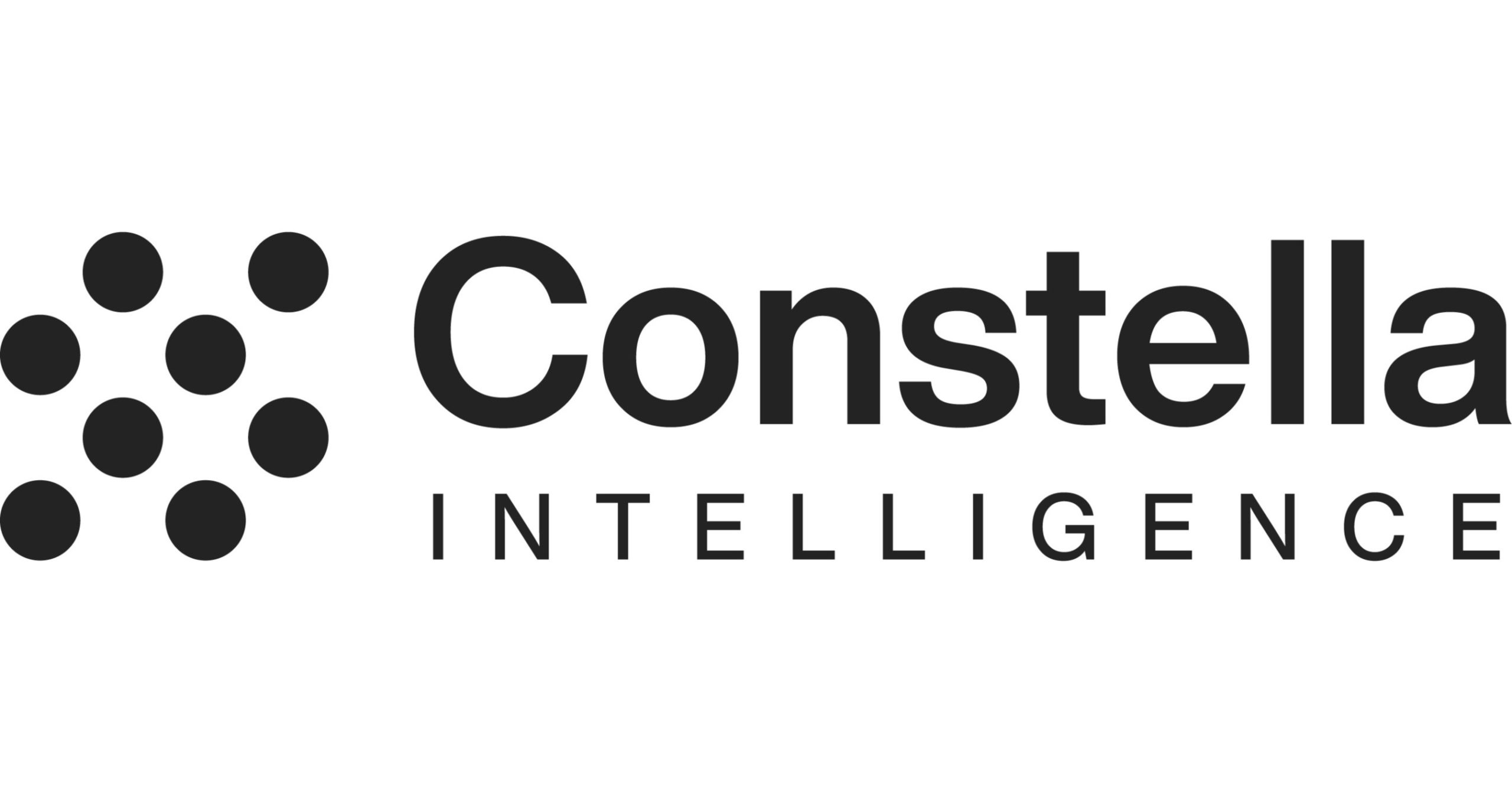 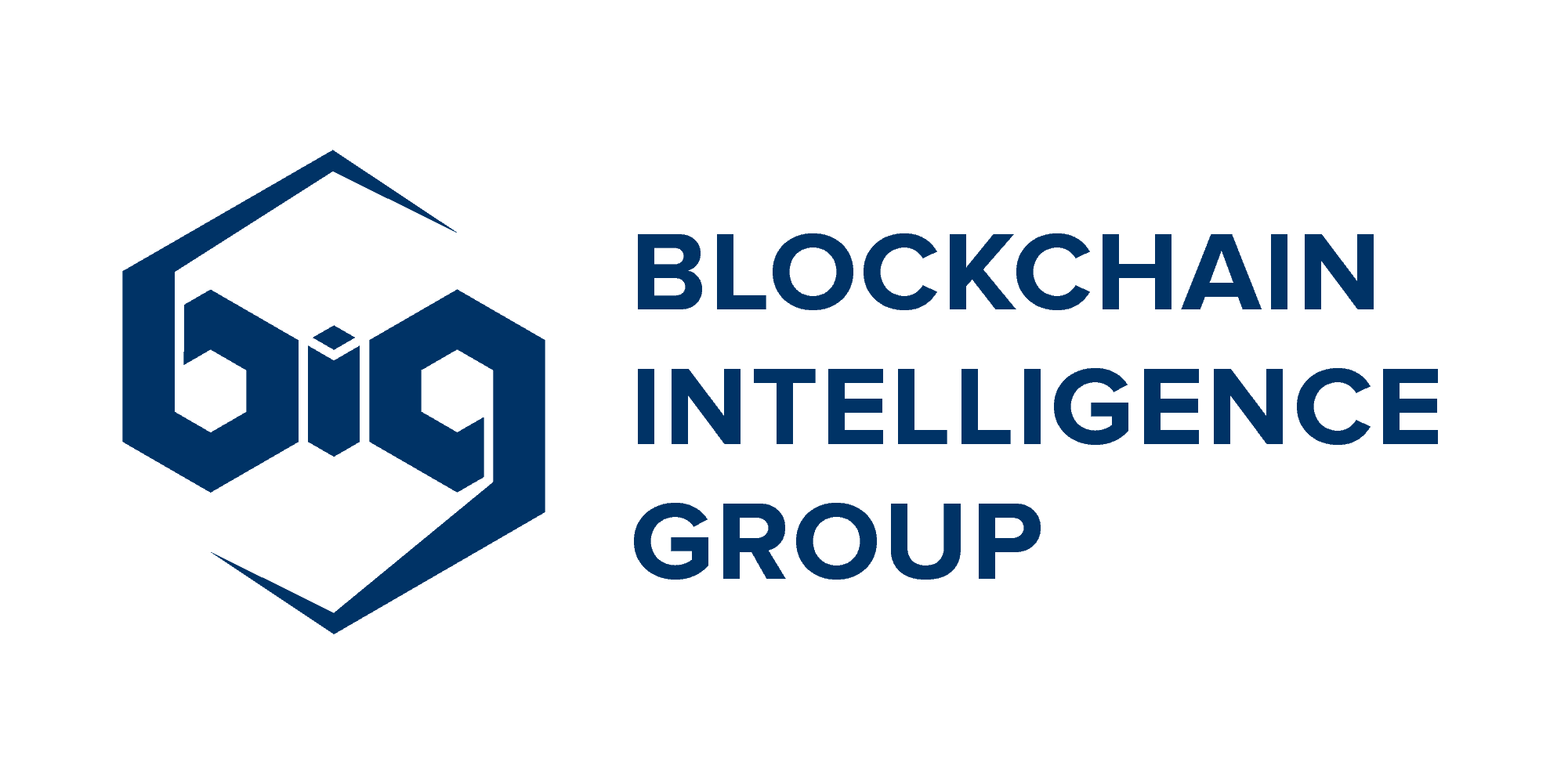 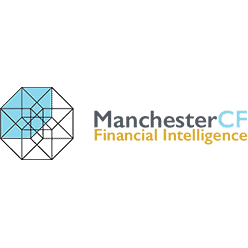 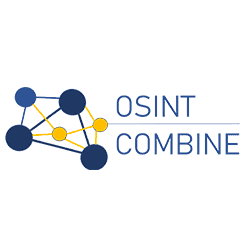 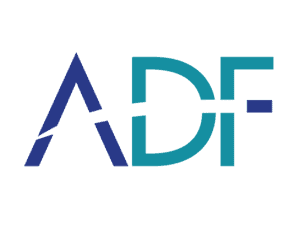 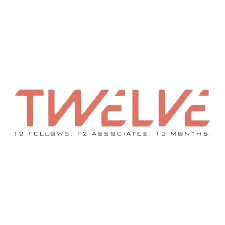 We’ve joined forces with some of the most powerful technologies, so you can experiment with ATII's Darkweb Intelligence platform across environments and projects. Darkwebathon puts the spotlight on the most innovative technologies and APIs, from blockchain and artificial intelligence to big data representing fundamental innovation that investigators can build strong cases with. 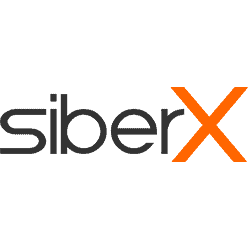 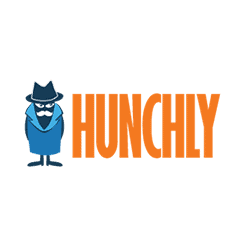 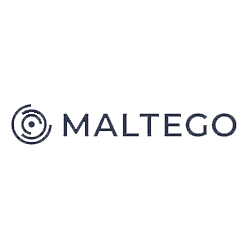 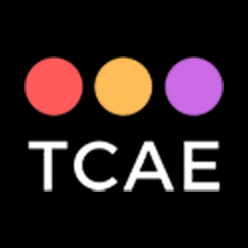 Chainalysis is an ATII sponsor

remitly is an ATII sponsor